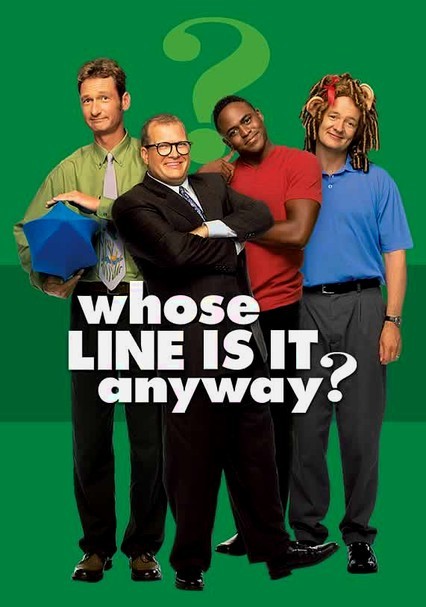 1998 TV-14 2 seasons
Four performers commit death-defying acts of spontaneous humor on this sketch-comedy game show in which host Drew Carey proposes skit and song ideas, and a quartet of improv comedians act them out for randomly bestowed points.

Drew Carey hosts the first season of this hilarious improvisational comedy show based on the British series of the same name, featuring the talents of comic regulars Wayne Brady, Colin Mochrie and Ryan Stiles. A rotating lineup of improv comedy games that incorporate singing, dancing and the use of ridiculous props includes "Let's Make a Date," "Sound Effects," "Hats," "Party Quirks" and "Foreign Film Dub."

Improv comedy becomes a frenetic, hilarious game show in the American version of the popular British hit. The final 10 episodes of Season 1 feature a sports report delivered underwater, a rap song about avalanches and more, all made up on the fly. Host Drew Carey puts contestants Ryan Stiles, Colin Mochrie, Greg Proops and several guest stars through one side-splitting exercise after another, often with suggestions from the audience.

Parents need to know that Whose Line Is It Anyway? is an improvisational comedy series whose cast members frequently use sexual innuendo, body part references, racial and gender stereotyping, and physical attributes like weight, hair loss, and stature for jokes. Many of the games encourage physical interplay, so there are many instances of suggestive positions that get laughs as well. Language is also a concern, with "f--k" and "s--t" bleeped, but lighter fare like "hell" and "damn" audible. Because it's unscripted, there's no telling what's around the corner in any of the improv games, and some of the content is too mature for tweens. The series has been through two American incarnations (following the British original from the '90s), with progressively looser standards of what's acceptable content. The bottom line? This hilarious show is well worth your time, but you'll want to screen each episode's subject matter if you're hoping to watch with your tweens.

Innuendos and sex-related physical comedy are a central theme of the show. Use of "pornography" as a media genre in improv games is common, as are motions that suggest exposed genitalia, breasts, and butts. Some games lead to physical contact between the players, and they're adept at making such exchanges seem sexually motivated.

Mock scuffles and injuries are common in the skits, and they're all staged for laughs. Some games/skits occasionally involve gross or cringe-inducing footage (for example, an up-close view of dental surgery, with a little blood).

Actors' imitations of celebrities and each other can be stereotypical. Body size, excess (or lack of) hair, stature, and other physical characteristics can take a beating, as can lifestyle choices, faith, and cultural markers. None of the content is meant to be malicious, and everyone gets a good laugh from it.

Later episodes see the inclusion of guest stars where audience members' participation used to be, and when visitors like Kevin McHale and Lauren Cohan stop by, their TV projects get a few plugs as well.

Beer and wine bottles appear occasionally as props, and the cast members sometimes drink from them in skits and act like they're drunk. The same goes for drugs; use is implied, but in a comical way.