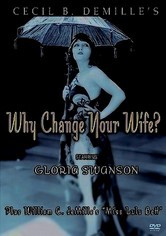 1920 NR 2h 44m DVD
Gloria Swanson stars as frumpy Beth Gordon, who loses her hubby to a sexy dame in director Cecil B. DeMille's comedy Why Change Your Wife, one of two silent films in this double bill. But Beth's ex is in for a big surprise when she glams up with an extreme makeover. Helmed by Cecil's brother William DeMille, the romantic drama Miss Lulu Bett stars Lois Wilson as a mistreated butterfly who emerges from her cocoon and ultimately finds happiness.