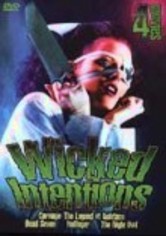 2000 NR 2h 58m DVD
A machete-wielding madman terrorizes a group of friends in the Nevada desert in the first bloody film of this horror double bill. With a face made of borrowed skin that only a mother could love, Quiltface hunts down four young people one by one. In Dead Seven, it's a mystery murderer who seeks revenge; after a couple of crazed drug dealers kill a client and the innocent deaf-mute who witnessed their crime, someone begins murdering their cohorts.