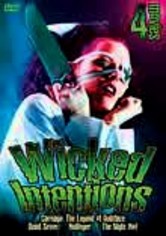 1993 NR 2h 47m DVD
A demonic entity stops at nothing to protect young Melissa in the first horror film in this double feature. Hellinger killed Melissa's abusive father; 20 years later, he returns to mutilate anyone he thinks might do her harm. Can Melissa's cousin stop Hellinger's bloody rampage once and for all? And John Leguizamo and James Raftery star in The Night Owl, about a thirsty East Village vampire who winds up falling in love with an intended victim.