Wilbur and the Baby Factory / Tanya 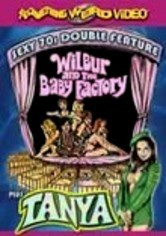 Wilbur and the Baby Factory / Tanya

1970 NR 2h 44m DVD
Two swinging, 1970s sexploitation films from producer Harry Novak breathe passion into improbable plots. In Wilbur and the Baby Factory, a well-known stud (Peter Ford) is lured by promises of plenty of sex into a billionaire's crazy scheme to sterilize the world. In Tanya, a wealthy man's daughter (Maria Aronoff) is kidnapped by revolutionaries whose lusty brand of brainwashing prompts her to change her name and become a nymphomaniac.