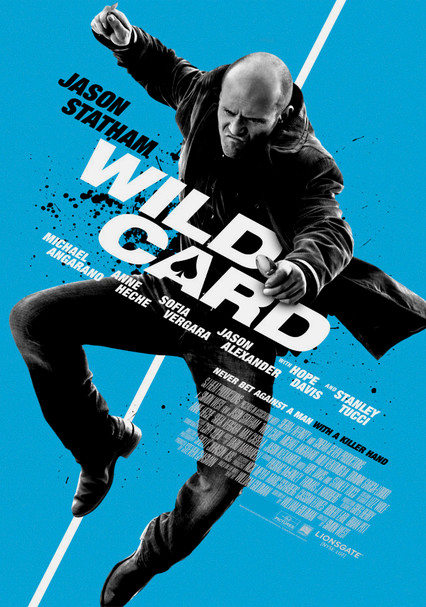 2015 R 1h 32m Blu-ray / DVD
Las Vegas bodyguard Nick Wild is a recovering gambling addict whose work places him in a crowd of high-rolling criminals. When a friend is brutally raped, Nick's quest for revenge makes him the target of a powerful mob boss.

Parents need to know that Wild Card is a remake of Heat, a 1986 William Goldman-penned thriller starring Burt Reynolds. Now headlining Jason Statham and reworked to modernize the story, the movie is more of a Las Vegas gambling drama than the typical Statham action adventure. Of course, there's still plenty of bloody action (others use guns, but not Statham's character, who can turn even household goods into deadly tools) and other violence (a prostitute is tortured and later tortures her attacker; people are injured or presumably killed). Language is strong and features plenty of "f--k," "s--t," "bitch," and "a--hole," and there's gambling, drinking, toplessness, and mention of prostitution in this Las Vegas-based story.

Discussion of prostitution (legal in Las Vegas) and what a prostitute should/shouldn't be expected to do for money. A man tells two topless women (whether they're prostitutes or strippers is left unclear) to leave his room. A man recalls that his night with a prostitute was rough but consensual, since she got paid. A woman tells a man that she loved him and gives him a tender kiss.

A few scenes are pretty bloody, with Nick taking on three different people and fighting with just his hands, driver's license, etc. He slashes, kicks, and punches; his opponents try to shoot, but he survives. He fights again later against several assailants. A prostitute is tortured and later tortures her attacker; people are injured or presumably killed.

Not too many positive messages, unless you see the movie as a cautionary tale about gambling and/or working as a bodyguard for shady Las Vegas operatives. That said, in the case of the young billionaire, the story stresses that courage is something anyone can find.