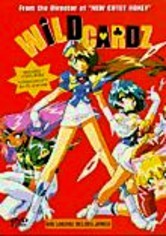 1999 NR 0h 50m DVD
When an army of robots shaped like gargantuan chess pieces invades, four female warriors dressed like playing cards unite to defend their homeland. Led by the stern Sunday Spades, the quartet is rounded out by combat expert Casa Clubs, the superspeedy Jo Diamonds and the seductive psychic Coco Hearts. Featuring both English and Japanese tracks, this little-known anime feature combines elements of both comedy and science fiction.