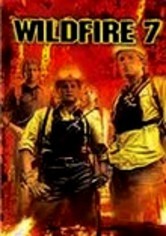 2002 NR 1h 34m DVD
Tracey Gold ("Growing Pains") stars in this made-for-television movie about a woman falsely accused of murder who will go to any lengths to make parole. Agreeing to join an elite group of firefighters, inmate Nell Swanson (Gold) trains with a cranky, hard-nosed "smoke eater" (Alexander Walters) before jumping into her ultimate assignment -- parachuting into a raging forest fire where her estranged daughter lies in peril.