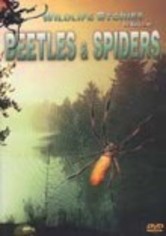 2001 NR 1h 45m DVD
Packed with riveting footage filmed at close range, this fascinating installment of the Wildlife Stories series puts beetles and spiders front and center for an up-close and personal look at their habits and natural habitats. With more than 3,000 known species, the beetle family is larger than that of any other creature known to man. But what's equally creepy and crafty? The world's vast array of spiders, of course.