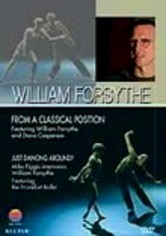 2007 NR 1h 18m DVD
Two documentaries focus on the work of choreographer William Forsythe. From a Classical Position captures Forsythe on the job as he transforms classical dance into modern form, while Just Dancing Around features candid interviews with Forsythe. Frankfurt Ballet associate Dana Caspersen assists Forsythe in the first film, and Oscar-nominated director Mike Figgis trails Forsythe for six weeks to produce an intimate portrait in the second piece.