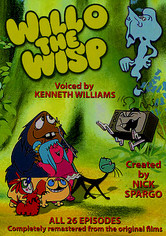 1983 NR 2h 10m DVD
Long after debuting on British television in the 1980s, this popular cartoon series for kids -- narrated by the ghostly Willo (who is, in fact, a mere wisp) -- now enjoys a comfortable cult status among adults. Hounded by the meddlesome Evil Edna -- a wicked witch who inhabits a TV set -- Mavis, Carwash, Arthur and the other inhabitants of Doyley Woods (voiced by Carry On star Kenneth Williams) do their best to stay out of her way.