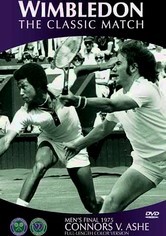 1975 NR 2h 0m DVD
With the world's top-ranked player, Jimmy Connors, heading to the finals without losing a single set, matched against Arthur Ashe, who at age 32 was nearing the twilight of his career, the 1975 Wimbledon Men's Final seemed poised for an all-out rout. However, when all was said and done, it was Ashe who emerged the victor in four sets, winning one of the most memorable matches professional tennis has ever produced.