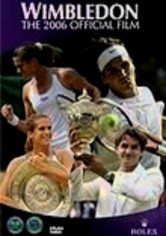 2006 NR 1h 0m DVD
British actor Sam Hazeldine narrates this official recap of the 2006 Wimbledon Championships, a year that saw No. 1 seeds Roger Federer of Switzerland and Amelie Mauresmo of France claim the men's and women's crowns. Other highlights include the return of Martina Hingis after a five-year absence; Andre Agassi's final match on the grass courts; and Martina Navratilova's farewell to the site of her record-tying win of 20 Wimbledon titles.