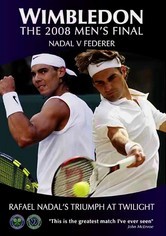 2008 NR 3h 44m DVD
Relive the showdown between Spain's Rafael Nadal and five-time Swiss champ Roger Federer in the high-tension 2008 Grand Slam. Braving cold wind and rain, the titans battle for nearly five hours before Nadal seizes victory. This presentation captures every moment of the record-breaking match that gave Nadal the lead in his duel with Federer and earned him back-to-back Grand Slam victories (the first since Bjorn Borg's hat trick 30 years before).