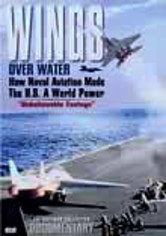 1986 NR 0h 59m DVD
Naval aviation played a critical part in making the United States a world power. This fascinating film combines newly found archival footage from some of the biggest battles with lively interviews with veterans. From the Teddy Roosevelt era to the present, the tale of naval aviation and American foreign policy has been dramatically punctuated by technological development, shifts in foreign relations, international conflict and war.