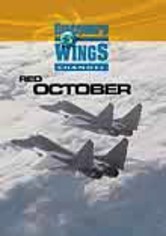 2001 NR 0h 47m DVD
Soar with U.S. Air Force pilots as they wing it to Laage Air Force Base in Germany, an air-to-air combat training destination for NATO allies that's also base to a fleet of … Soviet MiGs! Be there when these American flyboys square off in the wild blue yonder against the Luftwaffe's 73rd Fighter Wing -- a special squadron of elite German pilots -- in a two-week-long, mock-combat encounter aptly named "Red October."