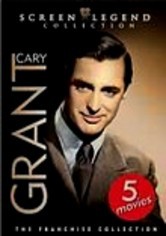 1935 NR 2h 32m DVD
Silver-screen icon Cary Grant is doubly dashing in this vintage pair of romances: Wings in the Dark (1935), in which Grant plays a blinded pilot; and Big Brown Eyes (1936), in which he's a debonair detective. In the first film, pilot Ken Gordon is unknowingly supported by barnstormer Sheila Mason (Myrna Loy) after losing his sight in an accident. In the second film, Det. Barr and glib reporter Eve Fallon (Joan Bennett) investigate a jewel heist.