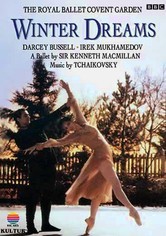 2008 NR 2h 5m DVD
In a small Russian town at the turn of the 20th century, Masha (danced by Darcey Bussell) flees the boredom of her marriage to schoolteacher Kulygin (Anthony Dowell) for an affair with the lovesick Col. Vershinin (Irek Mukhamedov). Based on Anton Chekhov's play "Three Sisters," the one-act ballet features choreography by Kenneth MacMillan. In a bonus feature, actress Lynn Redgrave discusses how the adaptation captures the play's essence.