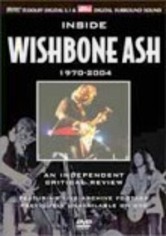 2005 NR 1h 11m DVD
The British rockers known as Wishbone Ash have been tearing up the stage for decades. It was long thought that the only video footage featuring all the original members of the band had been lost, but it recently turned up in the annals of BBC. Covering 1970-2004, this exclusive look at the group features every era from their debut album to "Number the Brave" and the contentious departure of founding member Martin Turner.