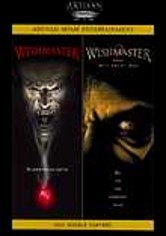 1997 R 3h 6m DVD
In Wishmaster, an evil genie known as the Djinn is accidentally released after centuries of captivity, and it wreaks bloody havoc so that it may regain its human form. In the sequel, the Djinn is once again liberated during a botched museum heist.