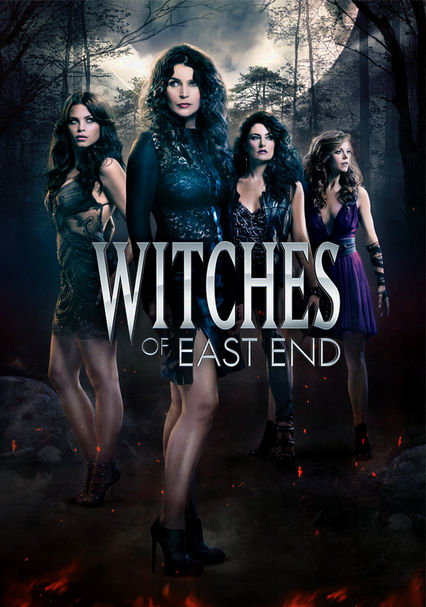 2013 NR 1 season
Besides being an artist and the mother of two daughters, Joanna Beauchamp harbors an identity she hides from the world: that of a centuries-old witch. But she hasn't told her two daughters that they too are witches -- until fate forces her hand.

To outsiders, the Beauchamps look like a normal, middle-class family, but mother Joanna and daughters Freya and Ingrid are, in fact, medieval witches. When Joanna's sister visits, she brings ominous news that could disrupt their peaceful lives.

Parents need to know that Witches of East End includes supernatural imagery that may disturb or traumatize younger or sensitive viewers: creeping fog, graveyards, evil creatures whose features transform into those of demons. The viewer will also see dead bodies with blood but no gore, and bloody wounds. One character transforms into a cat and back into a human; when she turns human she is generally naked and we see her nude from the rear. One character cheats on her partner; we see her seemingly nude in bed rolling around with a man. A main character works at a bar, and many characters drink and refer to drunkenness and needing a drink. Characters are in mortal jeopardy, though generally the level of menace is low and the goings-on are playful. Families who like otherworldly drama may enjoy watching together, but parents should stay on hand if younger viewers are present as they may find the witchy elements too scary.

All of the main characters date and flirt. A woman cheats on her fiance with his brother. A woman who transforms into a cat is seen fully naked from the rear.

Violence tinged with the supernatural: A woman is hit by a car and killed when she is in the form of a cat; innocent people are murdered by a mysterious force. We see dead bodies and some blood, but no gore and the level of menace is rather mild.

Some cursing, generally in suprise and not fury: "Holy s--t!" Also, some casual language like "pissed."

The supernatural family at the center of the action is interested in peace and justice and fighting the forces of evil. They're also a close-knit family who supports one another.

The series Witches of East End is based on a series of books; readers may want to check them out if they like the show.

One character is a bartender; many scenes take place in a bar and there are references to drinking ("I need a drink!") and drunkenness. Casual references to peyote in a potion.