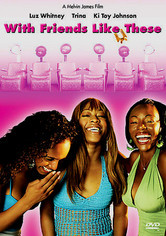 2005 NR 1h 15m DVD
After Cleo (played by rapper Trina) loses everything to her shady ex-boyfriend, inheriting her aunt's beauty salon seems like a godsend. But she soon realizes that running a successful salon is anything but glamorous. Originally conceived as a television pilot, the film follows Cleo's ups and downs and she tries to run the salon with the help of a colorful cast of employees, including Franklin, the diva stylist, and Kylie, a dizzy wannabe model.