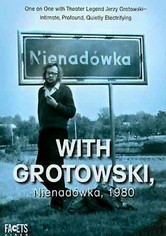 1980 NR 1h 0m DVD
Avant-garde theater artist Jerzy Grotowski searches for the people and locations he remembers and reflects on what he endured during a remarkable and traumatic childhood experience in this compelling personal documentary. In 1980, he brought a film crew with him as he visited Nienadówka, Poland, the village where he, his mother and brother were hidden by local peasants during the vicious Nazi occupation.