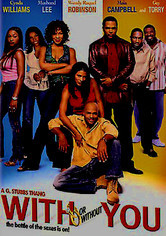 2003 R 1h 28m DVD
Robert Hightower (Mushond Lee) thinks he's got the perfect life ... until his girlfriend (Cynda Williams) discovers that she's pregnant and decides she wants to get married and "nest." In a quandary, Robert begins to buckle under the pressure as his homeboys line up to watch his back, while girlfriends of Robert's better half rush some much-needed moral support in her direction. It's up to Robert to decide which path to take. G. Stubbs directs.