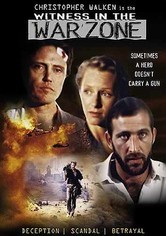 1987 NR 1h 40m DVD
Stationed in Beirut, cynical journalist Don Stevens (Christopher Walken) gets the chance to meet with elusive PLO leader Yassin (Amos Lavi). But when it turns out the man he interviews is an imposter, Stevens sets off on a risky quest to get to the bottom of the situation. A Scandinavian doctor (Marita Marschall) with close ties to Yassin soon becomes an ally. Hywel Bennett co-stars as Stevens's colleague, British reporter Mike Jessop.