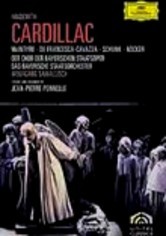 1985 NR 1h 29m DVD
Wolfgang Sawallisch conducts this acclaimed staging of Paul Hindemith's ambitious opera of the goldsmith Cardillac, whom fortune seems to favor and then abandon, featuring Donald McIntyre and Maria de Francesca-Cavazza in the starring roles. Filmed in 1985 at the Bavarian State Opera and directed by the legendary Jean-Pierre Ponnelle, the production captures every nuance of Hindemith's powerful tale of love, suspicion and betrayal.