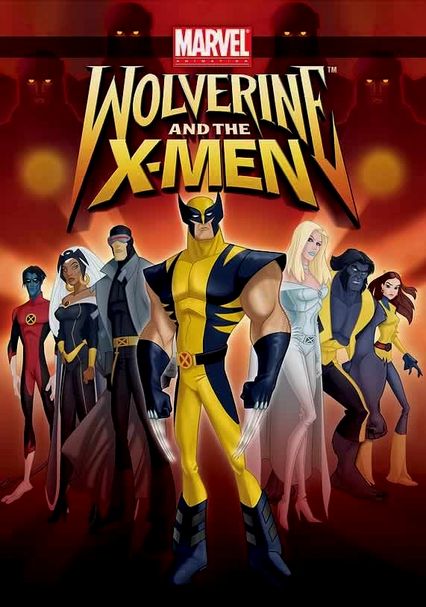 2008 TV-Y7 6 seasons
To bring down the powerful Mutant Response Division and ward off a catastrophic future seen by the missing Professor Xavier, Wolverine reunites with Storm, Rogue, Cyclops, Beast and the other X-Men to wage a war against the enemies of humanity.

When a chilling vision foretells a world in which the X-Men have abandoned their mission to protect peace, and the planet has descended into chaos, Wolverine must summon the disbanded mutants to alter this destiny. Together, they must put aside their skepticism and petty differences to save the Earth from apocalyptic disaster. This trilogy contains the first three episodes of the awesome animated series.

As they continue their fight to save the Earth from apocalyptic disaster, Wolverine and the X-Men go up against a series of impressive adversaries in these five action-packed episodes of the popular Nicktoons Network animated series. In an exciting matchup, Wolverine goes head-to-head with the Incredible Hulk -- but discovers another hidden enemy nearby. Other adventures involve fierce pirate battles, mind control and much more.

The apocalypse beckons for the mutant heroes of the X-Men in these five explosive adventures. The fun kicks off with the evil Sentinels capturing Xavier in the future and throwing him into a prison camp. Nightcrawler, Logan, Cyclops, Jean Grey and Rogue each figure largely in this installment, which culminates with the discovery of the Brotherhood's plan to start an all-out war between the humans and the mutants.

This collection of episodes from the animated series' first season includes "Stolen Lives," in which Wolverine and Mystique join forces to get inside the government's secret Weapon X project and face off against their nemeses Maverick and Sabretooth. Other episodes include "Hunting Grounds," "Badlands," "Code of Conduct" and "Backlash," in which the X-Men try to demolish the villainous Master Mold, which threatens all mutants.

With just about a week left until the end of the world, Wolverine and the rest of the X-Men dig in to uncover the shocking revelation that could bring it all to a halt. But they're also battling an equally menacing threat from within. Elsewhere, Xavier is sending information from the future that might help the X-Men solve the puzzle, and Angel is risking everything -- including his wings -- to challenge his father.

With the future of all humans and mutants hanging in the balance, Wolverine, Cyclops, Storm, Beast and their fellow X-Men attempt to restrain the duplicitous Emma Frost, save Jean Grey's life and foil the mighty Inner Circle's sinister plans. Also in this thrilling three-part finale of the animated series, Magneto launches a war against humanity; Professor Xavier battles Master Mold; and Emma attempts to destroy the impossibly powerful Phoenix.

Parents need to know that this chapter in the popular X-Men saga focuses specifically on the conflict between mutants -- people who've developed superpowers -- and the humans who fear them. Though it's aimed at kids and is age-appropriate for tweens overall, the series has a lot of depth and covers some fairly complex, adult themes (injustice, discrimination, fear of those who are different, etc.). Expect plenty of cartoon violence -- although, as in most animated shows, hardly anyone actually gets hurt.

No sex or nudity, though some of the female heroes wear revealing/tight costumes.

Lots of animated action featuring blasters, super-powered fistfights, energy beams, and other weapons. Buildings, vehicles, and other objects are often destroyed, but people are rarely injured.

Fairly complex messages for a kids' cartoon, touching on issues including injustice and discrimination. The government has declared mutants a menace and is hunting them down; those who've managed to avoid being imprisoned are living underground or in exile. While the X-Men hope to find a way for humans and mutants to peacefully coexist, other mutants have taken a much more confrontational approach -- particularly the Brotherhood, which advocates terrorist-style attacks against both anti-mutant government officials and the Mutant Response Division, a military unit charged with capturing people with super powers.

No commercial content within the series, but there's plenty of X-Men merchandise available for fans to purchase.