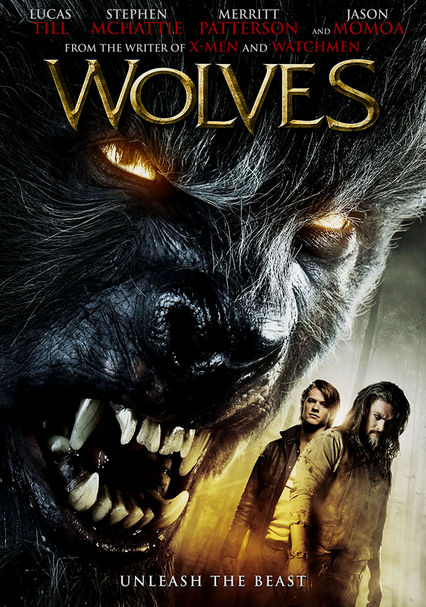 2014 R 1h 31m DVD
Cayden Richards is living the high school dream -- brilliant student, captain of the football team, beautiful girlfriend -- when his world is turned inside out by his parents' murders and the subsequent discovery that he's becoming a wolf.

Parents need to know that Wolves is a low-budget paranormal thriller about a high schooler who turns into a werewolf, accidentally kills his parents, and flees to a secret town full of other werewolves. There's quite a bit of violence (some of it gory and bloody, showing detached limbs and gaping, lethal wounds), a lingering sex scene or two (no full nudity but definitely enough to raise eyebrows), and strong language ("f--k," "s--t," "a--hole"). Lovers of the werewolf genre should consider this a guilty-pleasure pick, but those who were hoping it would be comparable to the likes of Twilight or MTV's Teen Wolf should stay away.

Cayden makes out with his girlfriend (before things get unintentionally violent); later he kisses and eventually has sex with another young woman -- a scene that's fairly long and shows lots of skin, touching, and rolling around.

Bloody and occasionally gory deaths (mostly between werewolves) include showing torn limbs, puddles of blood, and several dead bodies. Cayden rips at his girlfriend's top while they're making out; the romantic encounter quickly escalates into assault. The main character accidentally kills his parents. Some intense action on the football field early in the movie.

Knowing your past can be the key to understanding your future.

Adults drink in bars and at meals.