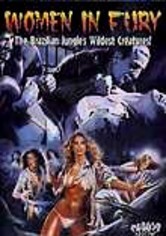 1985 NR 1h 30m DVD
After her brother murders a local drug lord, Angela (Suzanne Carvalho) takes the fall for him and is sentenced to 18 months in prison. While the ravishing beauty fends off the advances of both guards and prisoners, she must also defend herself against a group of inmates who worked for the man her brother killed. A connection with the prison doctor may bring about Angela's release … but to stay alive, escape may be her only answer.