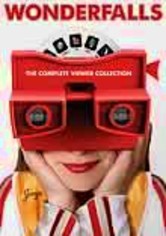 2004 NR 3 discs
Jaye Tyler (Caroline Dhavernas) has no aspirations aside from working as a clerk in a small gift shop adjacent to Niagara Falls until unexplainable events -- such as lifeless objects speaking to her in secret -- remind her she might be destined for offbeat greatness. Taking her cues from inexplicable sources, Tyler uses her Ivy League intelligence to come to the aid of perfect strangers who need her help.

Parents need to know that Wonderfalls promotes the idea that helping one person can change the lives of many -- not just the person you're singling out. The show doesn't really focus on sex, but it does have some romantic subplots that include implied intercourse, partial nudity, and a woman who is hiding the fact that she's a lesbian. You'll also hear some sexually charged humor, along with regular use of gateway words like "pissed," "bitch," and "ass," and see characters frequenting a local bar where they drink socially. Any violence is comedic in nature -- from plummeting into Niagara Falls to stabbing a man in the throat with a pen -- and there's very little blood.

Romantic subplots include implied sex with some partial nudity (male chests, legs), but no sensitive body parts are shown. Sexual humor includes jokes about orgasms, etc. Jaye's older sister is a lesbian but keeps her sexuality a secret.

Any violence -- like punching, falling, stabbing someone in the throat with a pen -- is played for comedy. Minimal blood.

Helping people in need is Wonderfalls' central theme, and most episodes end on a positive note without being preachy. The show also suggests that, by helping others, you can help yourself.