Wonders Are Many: The Making of Doctor Atomic 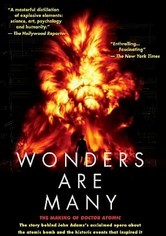 Wonders Are Many: The Making of Doctor Atomic

2007 NR 1h 32m DVD
Go backstage for an in-depth look at the making of "Doctor Atomic," the acclaimed modern opera about Robert Oppenheimer -- often called the father of the atomic bomb -- and the complex connection between science and art. The film features commentary from notable scientists, interviews with director Peter Sellars and composer John Adams, footage from the production, and a thought-provoking examination of how the bomb has changed the world.