Wonders of the African World 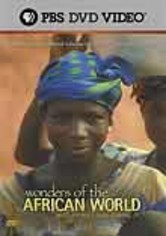 Wonders of the African World

1999 NR 3 discs
Take a journey to far-off lands with world-renowned scholar and educator Henry Louis Gates Jr. as he examines the historical events that shaped 20th century Africa. Exploring the continent on both land and water, Gates attempts to locate the centuries-old remains of celebrated African cities and kingdoms, sometimes finding what he's looking for in unlikely places scattered throughout modern towns.