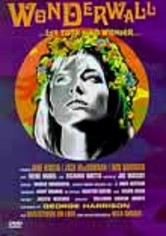 1968 NR 1h 25m DVD
Former Beatle George Harrison's mystical, magical soundtrack serves as backdrop to this exhilarating chronicle of love and lust in the trippy 1960s. No one would've expected uptight and upright Professor Collins (Jack MacGowran) to fall in love with his neighbor, a model with the carefree moniker Penny Lane (Jane Birkin), but that he does. And so he sets out to win her heart, even if it means he must proceed beyond the eerie Wonderwall.