Woody Herman and His Swinging Herd: 1964 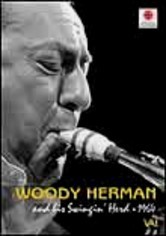 Woody Herman and His Swinging Herd: 1964

1964 NR 0h 55m DVD
Swing to the jazzy sounds of Woody Herman and his big band with this compilation of rare vintage performance footage from the golden age of jazz. These three separate performances, which aired on American television in 1963-64, capture the magic of Herman and his legendary "Band That Plays the Blues." Besides being a gifted clarinetist and alto saxophonist, Herman had the ability to put together some of the greatest bands jazz has ever seen.