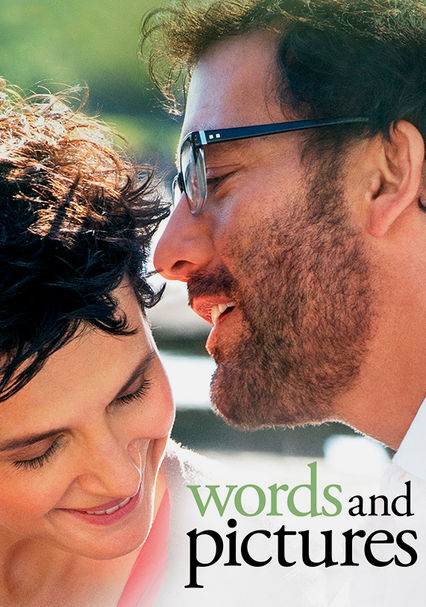 2013 PG-13 1h 51m Blu-ray / DVD
A picture is worth a thousand words -- or is it? That's the question prep school students must answer as their teachers egg them on in this diverting romantic comedy starring Clive Owen and Juliette Binoche as the instructors who spark the debate.

Parents need to know that Words and Pictures is a somewhat atypical romantic drama, diverging from the typical Hollywood model by focusing on some serious issues: One of the characters in the central couple is an alcoholic (he gets drunk in bars, at home alone, and even on his lunch break), and the other has a debilitating disease. What's more, not everything is resolved in the end, and there's some real fallout from the characters' choices. In addition to the strong drinking content, there's also some swearing (mostly variations on "s--t"), kissing, implied sex (though no graphic nudity), and a scene that revolves around a sketch of a naked woman.

A couple flirts frequently until they finally kiss. They're shown in bed, apparently after having sex, engaging in suggestive banter. One sequence revolves around a graphic drawing of a nude woman.

High school students get into a shoving match that leaves some on the ground. A male student verbally harasses a female classmate using racist and sexist language.

A fair bit of swearing, mostly variations of "s--t."

It's possible to turn yourself around, even after serious setbacks -- including debilitating illness or substance abuse. Things may not be perfect, but once you accept how things are instead of how you wish they were, you can start to appreciate them.

One character is an alcoholic who's frequently seen drinking and quite drunk. He drinks at work, he gets wasted at home after work, and he gets quite disorderly at local bars.