Workers for the Good Lord 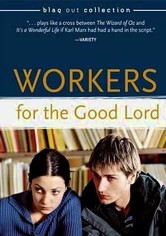 Workers for the Good Lord

1999 NR 1h 47m DVD
When his wife leaves him because he can't support their family, Fred (Stanislas Merhar) teams up with former flame Sandrine (Raphaele Godin) and enigmatic African "prince" Maguette (Emile Abossolo M'bo) on a wild robbery spree through Southern France. But despite all the excitement, Fred can't get his wife off his mind. French director Jean-Claude Brisseau's dark comedy was named one of the top 10 films of 2000 by Cahiers du Cinéma.