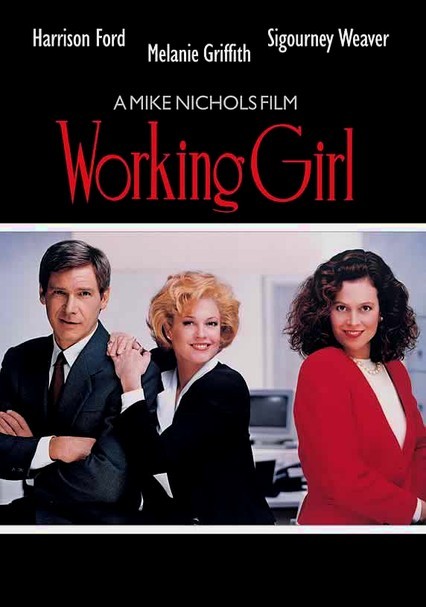 1988 R 1h 56m DVD
Tess McGill, an ambitious secretary at a brokerage firm, discovers that her boss has stolen her idea for saving a client. Hooking up with investment broker Jack Trainer, Tess takes over the deal and turns the tables on her boss.

Parents need to know that ages 14 and up could watch this on TV, where it airs fairly often. They give it quite a makeover to take out some of the racier content. Main characters Tess, Jack, and their contemporaries are in the midst of a drug-fueled, greedy era in which people will use anything they can, including their sexuality, to get what they want. Lots of women are naked in this film, from a woman in a porn video to the woman Mick cheats on Tess with. When they aren't naked, they're wearing revealing lingerie, from the full garter-belt get-up to a sexy slip. There are lots of cautionary tales in this film on how not to behave: At one point, Tess passes out from combining valium with tequila. When she wakes up in the morning in Jack's bed, she worries that she may have had sex with him. Today that would be considered rape. Everyone in this film lies to everyone else to get ahead, even when it's Tess stealing her idea back from Katharine.

Lots of sexual innuendo and women in lingerie and naked. Tess wears stockings, a garter belt, and a strapless bra for long stretches of scenes, and Katharine implies that she's slept with a doctor at the hospital where she's convalescing. Tess spends the night in Jack's bed after passing out from a combination of tequila and valium, and thinks she slept with him. Tess and Jack have sex, though most of it isn't shown. Tess' boyfriend cheats on her, and she walks in to find the couple having sex. The girl is naked, breasts exposed. The couple lay in bed naked together. Tess' boss sets her up with a man whom she thinks wants to hire her. Actually, he tries to seduce her by playing a porn, in which a naked woman is having oral sex performed on her.

Lutz sexually harasses Tess and sets her up with a colleague for sex, but tells Tess it's for a possible job. Katharine lies and attempts to steal Tess' idea for a corporate acquisition. When she gets caught, she tells the deal makers that Tess stole the idea. Tess masquerades as Katharine's equal instead of her secretary, stealing her clothes and persona to get what she wants. Jack sleeps with Tess even though he has a girlfriend. The moral is that to get ahead you have to lie, cheat and steal, even if you're stealing back your own idea.

Considerable drinking and some drug use. A stockbroker snorts coke and pops a bottle of champagne. Tess takes a valium and then drinks tequila with Jack. She passes out and is afraid she had sex with him when she was unconscious.