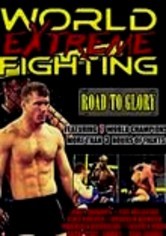 2000 NR 3h 26m DVD
There's a world of hurt in the Deep South in this action-packed volume of extreme fighting matches filmed in Rome, Ga., in 2000. Combatants include an impressive lineup of soon-to-be world champions before they earned their titles and made it big, including Matt Hughes, Pat Miletech, Jens Pulver, Renalto Babalu, Rodrigo Nogueira, Jeremy Horn, Jose "Pele" Landy and Phil Jones.