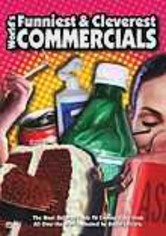 2004 NR 0h 47m DVD
Some commercials have become more popular than the television shows during which they air. Companies pay astronomical prices for airtime, often with extremely profitable results and commercials that stick in consumers' minds for years to come. Host David Leisure takes an unforgettable look at some of the most hilarious, ingenious and inventive commercials the world has ever seen.