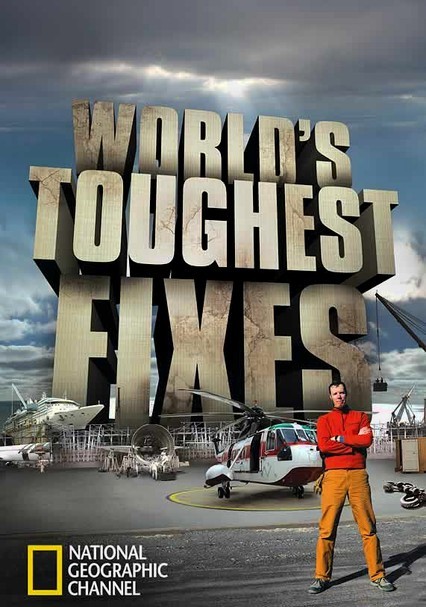 2009 TV-PG 1 season
Daredevil host Sean Riley seeks out the toughest and riskiest engineering challenges on earth in this real-life adventure series, showing viewers the details -- and the perils -- involved in fixing colossal and complex machines. Whether it's repairing a nuclear reactor or stringing high-voltage power lines from a helicopter, Riley gets as close to the action as possible to highlight the skill of the workers who tackle these daunting repair jobs.

No job is too big to tackle in this reality series, which features professional rigger Sean Riley plunging into perilous situations to help engineers and other experts repair massive machines, from a 38-ton engine to an Alaskan oil pipeline. Other exciting installments in this collection of 10 popular episodes find Sean tackling a nuclear turbine, high-voltage power lines, a 2,000-foot tower and a giant telescope.

Parents need to know that this series celebrates the work of skilled professionals like equipment operators, mechanics, and engineers who don't often receive recognition. While there's not too much iffy content, the featured tasks (nuclear turbine repairs, reassembling a passenger jet, and the like) are often dangerous and suspenseful; any misstep could have disastrous results. Some young kids may be alarmed by the workers' -- and the host's -- ominous reminders of the risks, but overall this series offers families of grade-schoolers and up an intriguing glimpse at many jobs that quietly keep our world in good running order.

The featured tasks aren't just tough -- they're also dangerous for the workers, who often discuss injuries they've suffered on similar jobs and remind viewers that problems can arise at any time. Ominous comments like "Things can always go disastrously wrong" are common. Safety precautions are taken, and protective gear is worn.

Rare use of "s--t" (generally in extreme circumstances) is bleeped.

The series highlights the expertise of the teams involved in carrying out these huge repair projects, pointing out how the workers' individual skills combine to ensure the safety and success of the overall task. Viewers gain a new respect for the people who fill jobs that don't often receive recognition.