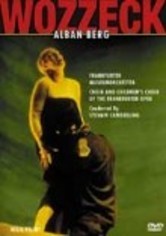 1996 NR 1h 37m DVD
Alban Berg's horrific war experiences propelled him to write his first great opera, "Wozzeck," in which an unforgiving world obliterates a young soldier's (Dale Duesing) sense of his own identity, turning him into a murderer. In this production staged by director Peter Mussbach, "Wozzeck" becomes a bitter lamentation over one man's lost innocence.