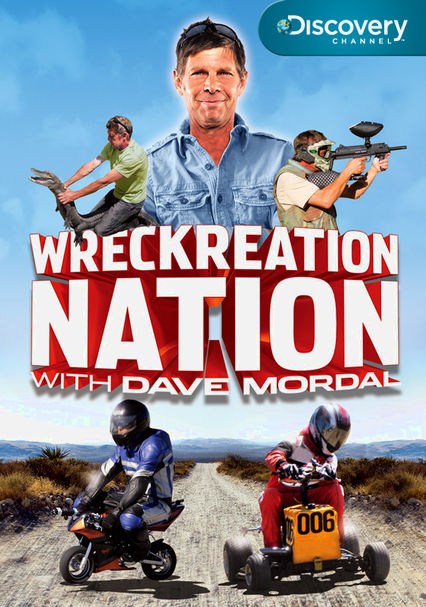 2009 TV-PG 1 season
As host of this Discovery Channel reality series, Dave Mordal scours the country for out-of-the-ordinary hobby enthusiasts whose pastimes are anything but typical -- whether it's wrestling alligators or dealing with explosives.

Join host Dave Mordal as he journeys from sea to shining sea documenting America's fascination with bizarre hobbies, such as lawn mower racing, Old West six-gun shooting and alligator wrestling. In the show's debut season, Mordal also visits a demolition derby, tries to catch a catfish with his bare hands, helps explosives enthusiasts make their own fireworks, builds a contraption for catapulting pumpkins and much more.

Parents need to know that many of the activities featured in this show about unusual pastimes are dangerous, and the danger is frequently shown. In one segment, for example, a woman is bitten by an alligator (though the injury is minor), and the bite is shown repeatedly. Sensitive viewers will be able to tell when the potentially iffy bits coming and avoid them, but none of it is mean-spirited, so it probably won't upset most tweens. Still, if you've got kids who are prone to copying what they see on television, you may want to watch along with them and provide reality checks as necessary.

There's no sex, per se, but there are a few off-color jokes. The host compares a souped-up lawnmower to Viagra, and in an alligator wrestling segment, he refers to wearing a groin protector so that he has some protection if the gator bites his private parts (the instructor informs him that the cup will do little beyond providing the gator with a plate).

Scenes show boxing, fake fighting (including a historical re-enactment), setting off fireworks, wrestling alligators, and more -- and in the alligator segment, one women does get bit (it's shown). The good news is that you can generally see this type of content coming if you want to avoid it. But either way, none of it is mean-spirited or malevolent.

Occasional bleeped-out words. In one episode, one of the bleeped words shows up in the subtitles as "s***."

While there are occasional positive messages about being true to yourself and facing your fears, there's also some gender stereotyping -- including the host putting himself down by saying that he's been screaming like a little girl and talking about men being particularly interested in motors and racing things (even though the episode in question featured a woman racer).

Lots of logos in the racing segments because there are lots of logos on the racers' clothing and the machines -- it's part of that world. But while it's hard to miss the Ford logo on someone's shirt, it's also not specifically focused on in any way. In other segments, there are no logos/brands.

There's the odd joke about getting drunk -- in one case, a woman says that she doesn't drink, but if she wins a race, she'll start that night -- but alcoholic beverages and cigarettes aren't typically shown. The host makes a joke about a souped-up lawnmower being a replacement for Viagra.