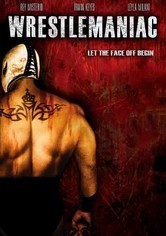 2006 NR 1h 15m DVD
Director Alphonse (Adam Huss) makes a big mistake when he decides to shoot his film in a remote Mexican ghost town. Turns out, the town is the lair of the legendary El Mascarado (Rey Misterio Sr.) -- a deranged wrestler who begins to kill off cast and crew in bloody death matches. One by one, El Mascarado stalks, captures and attacks his victims, as the remaining members of the group try to find a way to stop the killing spree.