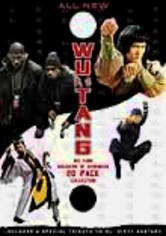 2005 NR 3h 0m DVD
A young and rebellious Shaolin monk joins a mysterious band of rebel fighters, and a tough-as-nails detective vows to take down an underground prostitution ring in this martial arts double feature. In Arhats in Fury, Zhixing (Zhenling Liu) is exiled from his temple by senior monks when he attempts to defend it against violent invaders. Then, Yu Byong, Angela Mao and Sammo Hung Kam-Bo star in the kung fu exploitation flick Operation Ironman.