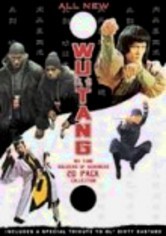 2005 NR 3h 0m DVD
A man from mainland China discovers that his girlfriend has become a Hong Kong prostitute, and a quick-tempered cop looks to settle a score in this double feature from the Wu Tang: Soldiers of Darkness collection. A hapless couple struggles to escape the clutches of an evil crime boss in the violent exploitation flick Escape from Brothel. Then, in Cop Killer, a police officer and his sister bend the law to nab an elusive band of crooks.