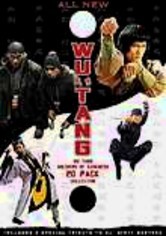 2005 NR 3h 0m DVD
In this martial arts double feature, a ninja cop fights off an evil gang in Soldiers of Darkness, and a band of warriors plots to expose information that could thwart a corrupt eunuch's ascent to the throne in Royal Family. The action kicks off with a sword-clashing extravaganza from prolific B-movie director Godfrey Ho. Then, a eunuch named Wang may be exposed as a traitor if a group of courageous soldiers can deliver evidence to the emperor.