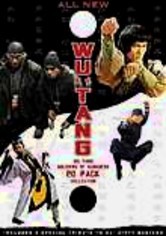 2005 NR 3h 0m DVD
This martial arts double feature from the Wu Tang: Soldiers of Darkness collection includes a series of Shaolin instructional demonstrations as well as the feature film The Undaunted Wudang, which stars Quan Lin as the daughter of a kung fu master. When her father is slain by Japanese fighters in a rigged match, the girl vows revenge and consults a Taoist priest who was once her father's colleague.