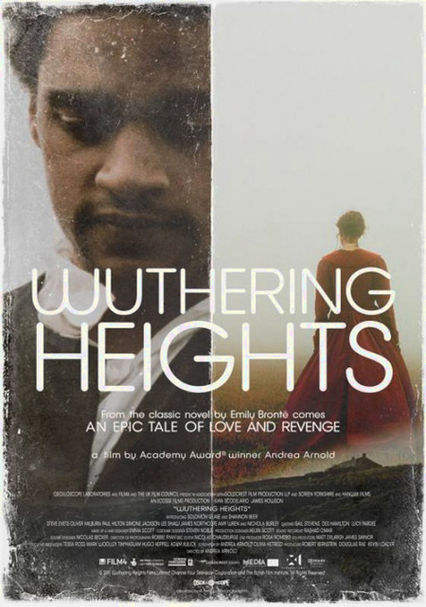 Parents need to know that director Andrea Arnold's adaptation of Wuthering Heights isn't a start-to-finish version of the novel but rather a focused account of the first half of the tragic love story. There's a great deal more language ("c--t," "f--k," "s--t," and more) in this unrated film than previous screen incarnations of Emily Bronte's classic. And while there are considerably fewer gothic elements in the movie than in the book, there's still a great deal of sexual chemistry between Cathy and Heathcliff, who go from horsing around and wrestling as kids to kissing passionately as adults (they also see another couple having sex in a field). A few characters die, and there are violent scenes of Heathcliff being flogged, farm animals being hunted and readied to eat, Cathy being attacked by a hound, and a wife being pushed around and locked in a room.

In one scene, a young Heathcliff sees a couple having sex in the field; some vague thrusting and moaning can be seen/heard. Heathcliff and Cathy don't consummate their relationship, but they do share several moments of intimacy and closeness. As young teens, they roll around on top of each other, and Cathy kisses Heathcliff's wounds. In the last portion of the film, couples kiss -- sometimes quite passionately. There's brief nonsexual male nudity as dead Mr. Earnshaw's body is washed.

Heathcliff is beaten brutally on more than one occasion. He's once flogged so badly that it leaves bloody scars on his back. Catherine is attacked by a hound and can barely walk, forcing her to convalesce in a neighbor's estate. More than one character dies. A husband pushes his wife and locks her in a room. There's also the graphic killing of animals for food on the Earnshaw farm.

In hindsight, it's easy to see that the message of Wuthering Heights is that, ideally, love shouldn't be limited by social status and circumstance -- that true love should prevail over societal constructs. But the story is also a cautionary tale about how obsessive love can become and how it can transform lovers kept apart into bitter and sickly shells of themselves.

Cathy's brother Hindley becomes a drunk after his wife's death. He's often seen with a drink in his hand.