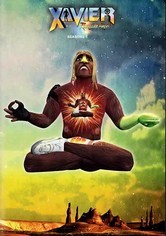 2007 NR 2h 0m DVD
From Vernon Chatman and John Lee, creators of the cult anti-kiddie show "Wonder Showzen," comes this strange comedic saga of an incompetent, self-absorbed man-creature seeking truth and revenge, leaving accidental chaos in his wake. With the beak of a bird, a snake for an arm and his running shoes, Xavier cuts a bizarre, disturbing figure that unsettles nearly everyone he meets. That is, until he bores them with his babbling bits of "wisdom."

Parents need to know that this animated Adult Swim series is intended for mature audiences only (and opens with a disclaimer saying so). It's full of crude references to oral sex, same-sex relationships, and incest; cartoon nudity (buttocks and breasts are visible; male genitalia is blurred); and blood (limbs are torn from people and animals, etc.). Racial and homophobic epithets ("honky," "dyke," and more) are used frequently, and the stream of words like "ass," "bitch," and "hell" is endless.

Lots of strong sexual innuendo and crude references to oral sex, sexual intercourse, and incest. Animated characters are seen naked (buttocks and breasts visible) while showering or having sex. Male genitals are blurred. Same-sex kissing and making out visible.

Pushing, shoving, and frequent punches to the groin area. Some graphic violence, like pulling limbs from people and animals and blood spattering. Also shows the charred remains of Xavier's adoptive father.

Strong language includes words like "hell" and "ass." Also frequent use of derogatory words like "honky" and "dyke."

The show doesn't pretend to be offering anything other than dark, adult-oriented humor. Expect frequent negative stereotypes (of homosexuals, small-town residents, and many more).