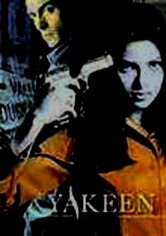 2005 NR 2h 0m DVD
When Nikhil (Arjun Rampal) loses his memory in a devastating car wreck, his wife, Simar (Priyanka Chopra), and friends help him reconstruct his life before the accident. But when he begins to uncover shocking facts about his life, the truth threatens to destroy him. Can he build a new life from the wreckage of the past? Directed by Girish Dhamija, this intriguing drama co-stars Kim Sharma, Sudhanshu Pandey and Atul Parchure.